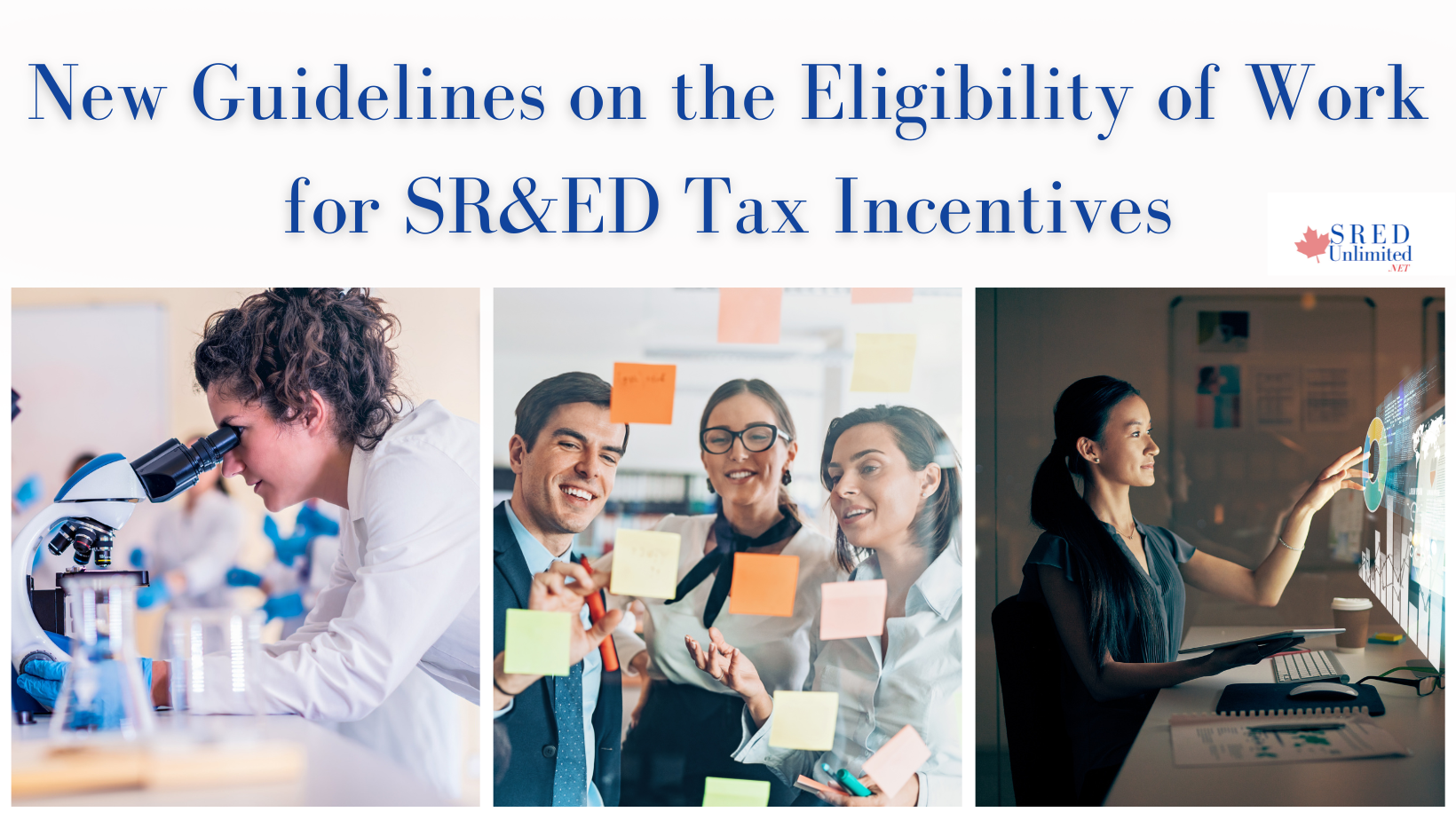 These changes bring up several questions for Canadian businesses:

Canada’s SR&ED Tax Credit program offers one of the most generous and broadly applicable research and development tax incentive programs in the world. The federal government has increased direct funding for R&D initiatives in recent years. The Scientific Research and Experimental Development (SR&ED) tax incentives program itself provides over $4 billion in tax incentives through more than 20,000 claims annually, making it still the largest single support program in Canada.

The CRA has recently provided new guidelines about what they consider eligible work under the SR&ED Tax Incentive program.

There has always been some ambiguity surrounding the definition of what qualifies and what doesn’t, making submitting SRED claims somewhat frustrating for applicants. The new guidelines are an attempt by the CRA to establish a more concise “why” and “how” framework as to whether a particular activity can be considered and claimed as an SR&ED expenditure; thereby making it theoretically easier for businesses to assess which expenditures would qualify.

Canadian-controlled corporations may be eligible to receive these incentives based on a percentage of the expenditures incurred during qualifying SR&ED activities.

What Are Qualifying SR&ED Activities?

Experimental development: Work conducted to generate new technological knowledge in order to solve a problem or obstacle which cannot be entirely solved with existing and available knowledge and research resources. These obstacles indicate that the existing technical knowledge is not sufficient, which may happen when.

When you take both the federal and provincial SR&ED programs into account, your company could potentially produce a refundable tax credit worth nearly 50% of qualifying expenditures.

Questions That The CRA Looks For In Every Claim

Is there a technological risk or uncertainty?

As part of the SRED submission process, the CRA expects companies to be able to describe and demonstrate (through documentation) that the research and experimentation conducted was based on an assumption (“hypothesis”), and that some form of conclusion was reached as a result of that experimentation, which either resolved the problem or served as the inspiration or direction for the next assumption and experimentation phase (or “iteration”). This entire process is what the CRA calls “the scientific method”. In some industries, this sort of thought process is very deliberate (eg: beer making, cosmetics), but in other industries, the experimental process is much more instinctual. It’s important to be able to translate “let’s try this” into “we assumed that if we did this, this might happen”.

Did the process result in technological advancement?

In addition, you need to answer the question of whether experimentation was necessary to reach the conclusions you did. There was no way you could have predicted the outcome either from researching public sources or from brainstorming and analyzing hypothetical outcomes.

The conclusions reached as a result of this experimentation﹘whether or not the experimental process actually succeeded in solving your problem – is considered your “technological advancement”.

There also needs to be detailed records of the hypotheses, tests, and results as the work progressed.

To make answering the above questions a bit simpler, the CRA has revised its guidelines to include two overarching questions to determine SRED tax program eligibility: “why” and “how”.

How is the work being conducted? Is it by means of systematic investigation (the scientific method described above) or a search carried out in a field of science or technology via experimentation or analysis?

How Different Are These New SR&ED Eligibility Guidelines?

The short answer to this is, not really that different at all. The longer answer is, that the new phrasing is simply CRA’s way of clarifying or simplifying the mindset around what work may qualify. Most ordinary people engaging in research and development have a hard time wrapping their minds around how their work translates into SRED eligibility requirements. It is much easier for people to self-assess whether or not their work qualifies if they can answer the “why” and “how” of what they’re trying to do.

At least, that’s what we can reasonably assume the CRA is intending by this change. Fundamentally, the original 5 SRED questions are still there.

The first legacy SRED eligibility question has now been reworded to “Why are you engaging in this project experimentation? Is it because you’ve encountered a technological risk or uncertainty in your R&D project?” The last four legacy SRED eligibility questions have been summed up by the “how” requirement to supplement the previous requirement of the description of systematic investigation or search.

Why You Still Need An Experienced SRED Consultant

As with most things involving communication from the CRA, when they try to explain more or simplify things, they often create more confusion than they solve. Overall, these two questions of “why” and “how” can certainly help people determine whether or not they may have work that may qualify for the program, but they certainly do not help with preparing the necessary documentation to submit a claim.

Through 2020 and 2021, the CRA stopped selecting claims for review and simply just sent out money, in recognition of the fact that Canadian businesses were struggling due to the shutdowns. As we continue to emerge on the other side of the pandemic, the CRA is once again resuming its screening and reviewing of claims. It is unclear precisely how the claim reviewers at the CRA will apply these definitions when reviewing claims.

Working with an experienced SRED consultant is still your best option to make sure you claim as many eligible expenses as possible. It’s our job to connect the dots and make applying for SRED as easy for you as possible with simplified, straightforward, and efficient SRED submission solutions.

Get in touch today for your free, no-obligation 15-minute consultation.