F is for Failure but Positive for SRED 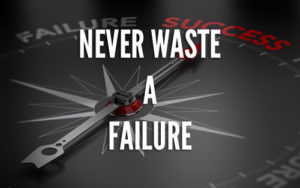 Companies are typically not in the habit of rewarding employees for failing. In fact, whole teams of people can lose their jobs over a failed project. However, failure during the scientific research and experimental development process of your company’s work is extremely useful for your SRED claim.

From the SR&ED tax credit perspective, failure means you have generated new knowledge related to the technological obstacle encountered during your experimental process. Now, failure of a research project does not, in and of itself, guarantee that your project work is SR&ED eligible. That is something that your SR&ED Unlimited consultant can help determine.

The Value of Failure in SRED

It is estimated that between 72% and 82% of attempted projects fail to some degree (according to Standish Group’s Chaos Report). That constitutes a huge opportunity for your company to receive a refund of the experimental costs invested in those projects.

Most companies don’t even want to acknowledge the failed part of their experimental development even though not learning from failure can lead to future failures. It is not uncommon for one of our SRED Unlimited consultants to hear only the success stories or something like “Well, yeah, we tried to do this, but that didn’t work, so let’s talk about the successful part of the project instead.” It is also not uncommon for us to discover through our interviewing process that a client didn’t think a failed project was worth mentioning simply because it failed, and so was not even presented as a possible inclusion in their claim.

In terms of scientific research and experimental development, failure of a project or failure to achieve the result you’d hoped for through your experimentation usually leads to the hypothesis needed for the next step. However, even if your conclusion is to abandon an experimental approach, it may still be worth discussing with your SRED Unlimited consultant, especially if the experimental process that brought you to that conclusion involved actions that were not considered standard practice or “public domain” knowledge for your industry to solve the particular problem you faced.

The new knowledge generated from a failed project or experimental approach is extremely valuable and instrumental in fueling the next stage of product development, even if you decide to abandon the product altogether and move on to developing something else. While this new knowledge may not seem very “profitable”, it can still be used for SRED and contribute towards a tax credit—which is still cash in your pocket.

To help increase the chances of acceptance of your claim for failed experimental projects, make sure you document everything about your experiments:

The CRA is looking for records and journals and issue logs and memos by the people who actually did the work to show what really happened.

Your team’s failure is not something to be ashamed of. It’s an opportunity, a stepping stone to new knowledge and quite possibly a very valuable inclusion in your SRED claim.